The 1757 Vestry of Overwharton Parish 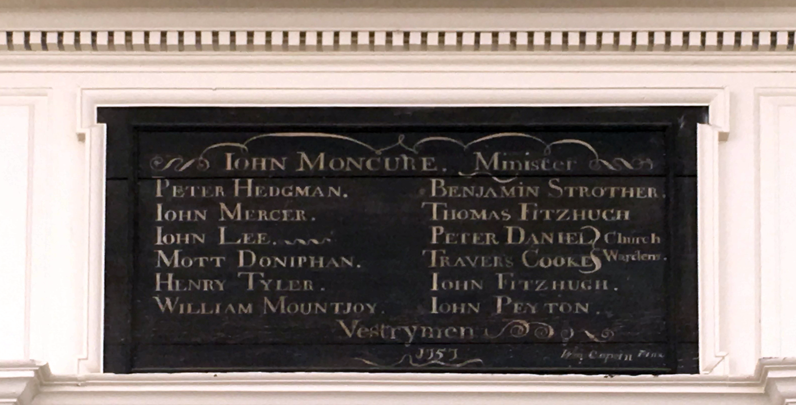 The 1757 Vestry and Rector plaque on the balcony, written by William Copein.

Aquia Church's Vestry in 1757 exemplified the small, tight-knit community of Stafford's wealthy class. Many of the church's leadership were related in one way or another. In particular, this group of men have strong ties to two Founding Fathers, George Mason and George Washington. The vestry are memorialized on an original plaque located on the balcony. The men where Peter Hedgman, John Mercer, John Lee, Mott Doniphan, Henry Tyler, William Mountjoy, Benjamin Strother, Thomas Fitzhugh, Peter Daniel, Warden, Travers Cooke, Warden, John Fitzhugh, John Peyton and Rector The Rev John Moncure.

Peter Hedgman (c1700-1765) lived in Rose Hill and was a prominent Stafford citizen. He a militia officer he served as a member of the House of Burgesses from 1742-1758.[1] His son would marry Hannah Ball Daniel, the daughter of vestryman and warden in 1757, Peter Daniel (1706-1774). Peter's grandmother was the half-sister of Mary Washington, mother of George. She writes to her half-brother Joseph Ball in Stafford, England in July of 1760 about both the Daniel and Hedgman families: "Mr. Daniel and his wife and family is well. Cozen Hannah has been married and lost her husband. She only had one child, a boy."[2] Peter Daniel's son would later marry Rev. John Moncure's daughter.

John Mercer (1704-1768) was Virginia lawyer and uncle by marriage to George Mason. When Mason's father died, Mercer would share guardianship of the boy with his mother and George grew up studying in Mercer's library which consisted of between 1500 and 1800 books. John Mercer was also the personal lawyer to George Washington and his sons remained close to Washington even after John's death. his George served as an aide to Washington during the French and Indian War, and his son James was a lawyer in Fredericksburg who built the St. James house where Washington on August 6, 1770.[3] His youngest son, John Francis, was an anti-Federalist at the Constitutional Convention and later Governor of Maryland.[4]

John Lee (1703-1789) was a member of the prominent Lee family and 1st cousin to Thomas Lee of Stratford Hall. A bachelor all his life, he enjoyed visiting family his family and friends most of the time, including his more famous cousins Thomas Ludwell Lee at Bellevue in Stafford and Francis Lightfoot Lee of Menokin in Richmond County. Philip Vickers Fithian, tutor in the family of Robert Carter of Nomini Hall, said of John Lee in his dairy entry in 1774,

"To Day about twelve came to Mr. Carter’s Captain John Lee, a Gentleman who seems to copy the Character of Addison's Will Wimble. When I was on my way to this place I saw him up at the country at Stafford; He was then just sallying out on his Winters Visit, & has got now so far as here, he stays, as I am told about eight or ten Weeks in the year at his own House, the remaining part he lives, with his waiting Man, on his Friends.”[5]

William Mountjoy (1711-1777) lived near what is now called Brooke and his family owned a local grist mill, Brooke's Mill, which in 1929 the stone from the structure was sold and used in the Bishop's Garden at the National Cathedral in Washington, DC.[8] On February 27, 1766, Mountjoy along with three of George Washington's brothers, James Monroe's father and Richard Henry Lee and Francis Lightfoot Lee, brothers who would later sign the Declaration of Independence, signed the Leedstown Resolutions. Written by Thomas Ludwell Lee of Overwharton Parish,  Leedstown Resolutions was signed by 115 men in 1766, to protest the Stamp Act of 1765 and Archibald Ritchie,  a merchant in Tappahannock, who announced his intention to use papers with the stamp.[9] This resolution is seen as a precursor to the later Declaration of Independence.

Henry Tyler (c1710-1777) served as clerk of Stafford County Court till his death. His wife's step-father John Grant, sold Ferry Farm in 1738 to Augustine Washington, becoming George Washington's childhood home.[10] His wife Alice was also the niece of vestryman Benjamin Strother (c1700-1765). Strother served the House of Burgesses in 1718 and his first wife was the widowed Mary Mason Fitzhugh, aunt of George Mason. When she died, Strother married vestryman John Peyton's (1691-1760) widow Elizabeth Rowzee Peyton, raising his friend's children.[11] John Peyton served in the House of Burgesses and served in Governor Alexander Spotswood's Knights of the Golden Horseshoe Expedition. He is now buried in the church cemetery and his descendants with the John Peyton Society visit Aquia Church every year for Heritage Day.[12]

Thomas (1725-1768) and John Fitzhugh (1727-1809) were part of one of the largest landowner families in Stafford County and were cousins to vestryman Travers Cooke, cousins by marriage to vestryman John Lee and two of their uncles were married the George Mason's aunts.[13] Their grand-nephew, William Fitzhugh, built the famous Chatham Manor in Stafford.

When George Mason's father died when he was only nine years old, his mother moved to a small home near Chopwansic Creek, now part of Quantico Base.[14] His neighbor was Rev. John Moncure who also lived along the creek at Clermont.[15] Mason would have grown up attending Aquia Church, like his father and grandfather before him, especially when visiting John Mercer of Stafford County and sometimes attended services in Dettingten Parish where the Rev. James Scott, brother of Alexander, preached.[16] Upon reaching the age of 21, George Mason took control of his lands in Fairfax County and in 1749, began serving on the vestry of Truro Parish, attending Pohick Church. On April 4, 1750, John Moncure married George Mason and his wife, Ann Eilbeck and was present for the baptism of his third child, William, in 1756 serving as godfather.[17] George Mason was the godfather to three of Moncure's children and in the Rev.'s will, he named "my good friend" Mason, the guardian of his children.[18] When Moncure died in 1764, George Mason wrote to his widow: 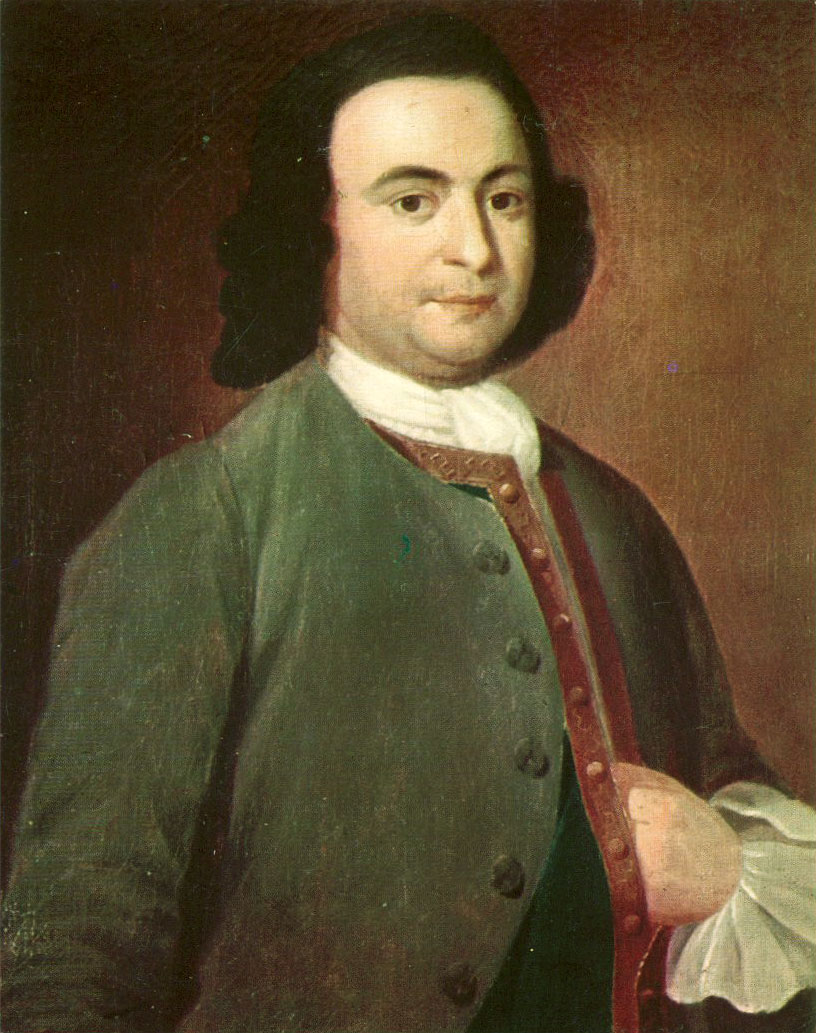 George Mason commissioned a portrait painted by John Hesselius of Annapolis, Md., around the time of Mason’s first marriage in 1750. This is a copy painted by D.W. Boudet of the original, which was ruined.

I have your letter by Peter yesterday, and the day before I had one from Mr. Scott, who sent up Gustin Brown on purpose with it. I entirely agree with Mr. Scott in preferring a funeral sermon at Aquia Church, without and invitation to the house. Mr. Moncure's character and general acquaintance will draw together much company, besides a great part of his parishioners, and I am sure you are not in a condition to bear such a scene; and it would be very inconvenient for a number of people to some so far from church in the afternoon after the sermon. As Mr. Moncure did not desire to be buried at any particular place, and as it is usual to bury clergymen in their own churches, I think the corpse being deposited in the church where he so long preached is both decent and proper, he would he preferred it. Mr. Scott writes to me that it is intended Mr. Green [rector of Pohick Church] shall preach the funeral sermon on the 20th of this month, if fair; if not, the next fair day; and I shall write to Mr. Green to-morrow to the purpose, and inform him that you expect Mrs. Green and him at your home on the day before; and if God grants me strength sufficient either to ride on horseback or in a chair, I will certainly attend to pay the last duty to the memory of my friend; but I am really so week at present that i can't walk without crutches and very little with them, and though I stayed but two or three minutes at a time, it gave me such a cold as greatly increase my disorder. Mr. Green has lately been very sick, and was not able to attend his church yesterday (which I did not know when I wrote to Mr. Scott;) if he should not recover soon, so as to be able to come down, I will inform you or Mr. Scott in time, that some other clergyman may be applied to.

I beseech you, dear madam, not to give way to melancholy reflections, or to think that you are without friends. I know nobody that has reason to expect more, and those that will not be friends to you and your children now Mr. Moncure is gone were no friends to him when he was living, let their professions be what they would. If, therefore, you should find any such, you have no cause to lament the loss, for such friendship is not worth anybody's concern.

I am very glad to hear that Mr. Scott purposes to apply for Overwharton parish. It will be a great comfort to you and your sister to be so near on another, and I know that goodness of Mr. Scott;s heart so well, that I am sure he will take pleasure in doing you every good office in his power, and I had much rather he should succeed Mr. Moncure than any other person. I hope you will not impute my not vising you to any coldness or disrespect. It gives me great concern that I am not able to see you. You may depend upon my coming down as soon as my disorder will permit, and I hope you know me too well to need any assurance that I shall gladly embrace all opportunities of testifying my regard to my decreased friend by doing every good office in my power to his family.

I am, with my wife's kindest respects and my own, dear madam,

Your most affectionate kinsman,

George Mason's connection with the Moncure family continued throughout his life and in his will he gave "to Mr. John Moncure a mourning ring of three guineas value which I desire him to wear in memory of my esteem for my much lamented friend his deceased father."[20]

Back to the History Page
Aquia Episcopal Church (540) 659-4007
office@aquiachurch.org