In 1664, Stafford County was established out of Westmoreland County and divided into two parishes, Overwharton and Chotank. Three years later, three churches were established in the new county. One was Potomac Church, one of the largest churches built in Virginia and the primary church of the county, another was located near Falmouth. Aquia Church, named after the nearby creak, was built "at the southwest side of Aquia."[1] Sometime before 1700, Aquia Church burned down and "was replaced with a small wooden chapel."[2] 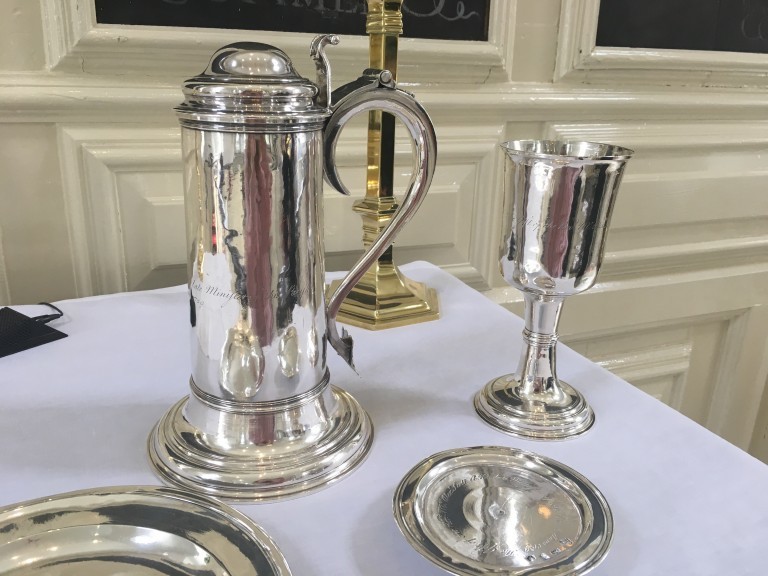 Aquia Church's communion set engraved with "Given by the Revd. Alexander Scott A:M, late Minister of this Parish, 1738."

In 1711, The Reverend Alexander Scott (1686-1738) became rector of Overwharton parish. Originally from Dipple parish in Moray, Scotland,  he settled in Stafford between the Chopawamsic Creek and the Potomac River naming his estate Dipple after his home. The Reverend John Moncure (1710-1764) returned to America after becoming ordained to become a curate under Scott, eventually marring Scott's sister-in-law, Frances Brown (1713-1770). Rev. Scott died in 1738, both he and his wife Sarah are now buried in the church cemetery. In his will, he directed that a communion set be made for Aquia Church. The set includes a silver pottle, flaggon, patton, and a pint chalice with cover engraved with "Given by the Revd. Alexander Scott A:M, late Minister of this Parish, 1738."[3] The communion set was buried during the Revolutionary War, War of 1812, and the Civil War and can be seen during the Heritage Day and Homecoming services which occur in May and September every year. The Reverend John Moncure succeeded Scott as Rector of the church, and ushered in a new era for the church.

As time went on, Potomac Church proved to be difficult to access, as it was located far from the main road. Church attendance was mandatory by law, failure to show would lead to fines. Aquia Church was conveniently right off the main road from Fredericksburg to the northern part of the state.[4] The wooden church, now forty four years old, was in need of some repairs and the vestry met to discuss the needs of the church and decided that the "old Church was not worth repairing".[5] It was decided that a new brick church was to be erected at the site. By 1745, Stafford residents lead by Lawrence Washington, George Washington's elder half-brother who owned the nearby iron-works Accokeek Furnace, petitioned the House of Burgesses against taxing the residents to build the new church:

"...the vestry of the Parish of Over-wharton, in the County of Stafford, without previous Notice, have agreed to give One Hundred and Fifty Three Thousand Pounds of Tabacco for a new brick church, notwithstanding there is at present a very good Church at the same Place, which might be repaired at a moderate Expense: That they conceive, as the said Iron-Works lie in the Parish aforesaid, and employ many Tithables in carrying on the same, they will labour under great Hardship thereby; and praying such Relief as this House shall seem meet."[6]

It seems that the resistance to the new church proved to be successful for a time, but when Lawrence Washington contracted tuberculosis in 1749 leaving for England and later Barbados in hopes of improving his health, the vestry took up the task of building the new church once again.[7] On June 6, 1751, The Virginia Gazette published the announcement that vestry had come to a "Resolution to build a large brick Church, of about 3000 Square Feet in the clear, near the Head of Aquia Creek, where the old Church now stands.[8] Mourning Richards, an architect from King and Queen County was hired to be the undertaker of the construction and William Copein, who later would build Pohick Church in Fairfax, was hired as the stone-mason. In March of 1755, disaster struck Aquia Church as reported in The Virginia Gazette: 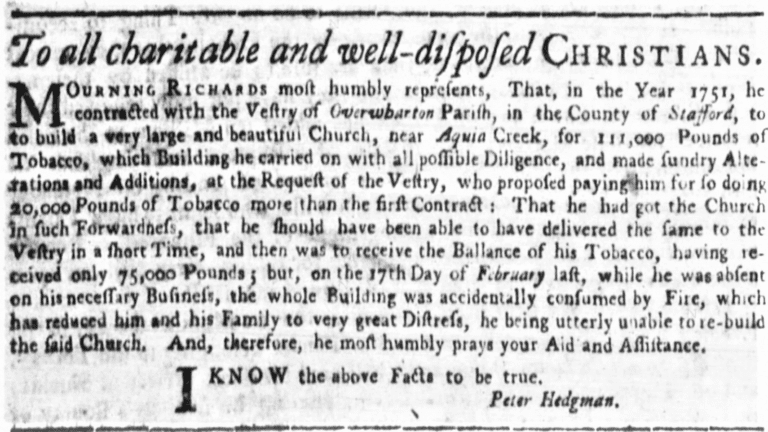 Published on Friday May 16, 1755 in the Virginia Gazette, Peter Hedgman, a member of the vestry, makes an appeal for Morning Richards.

"We hear from Stafford County, that the new Church at Acquia, one of the best Building in the Colony (and the old wooden one near it) were burnt down on the 17th Instant, by the carelessness of some of the Carpenters leaving Fire too near the Shavings, at Night, when they left off Work. This fine Building was within two or three Days Work of being compleatly finished and delivered up by the Undertakers, and this Accident, it is said, has ruined him and his Securities Hundred and Fifty Three Thousand Nine Hundred and Twenty Pounds of Transfer Tobacco, to be paid at four payments...petition rejected."[9]

For a time this disaster ruined Mourning Richards, having been away when the fire began, he worked diligently without pay to rebuild the church. Once the church was finished in 1757, the vestry decided to pay Richards for his additional work. In April of 1757, the House of Burgesses authorized the vestry to be 'impowered and required to levy on the inhabitants of the said parish, for the use of the said Morning Richards, in one or more years, and in such proportion as they shall judge least burthensome to the said inhabitants."[10] This second taxation did not go over well with the 'Sundry Inhabitants" and they petitioned the House of Burgesses in both 1757 and in 1758 against the vestry of the church, but were unsuccessful.[11] Aquia Church was now finished; built with Flemish bond brickwork and Aquia sandstone from the local quarry at Government Island. Aquia sandstone was used in many local buildings including the White House, Federal Capitol, Mount Vernon, Gunston Hall, Town Hall in Fredericksburg (FAM), Pohick and Christ Church of Alexandria. You can read more about the church's architectural history at our Architecture page.

Back to the History Page
Aquia Episcopal Church (540) 659-4007
office@aquiachurch.org